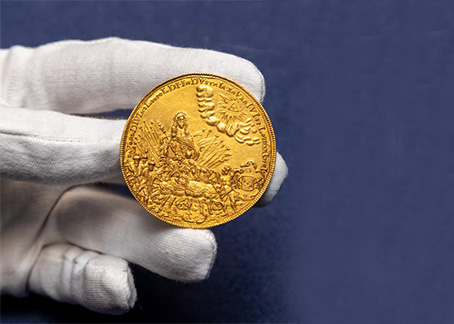 A 10-ducat gold medal depicting the 1686 Liberation of Buda from the Turks, of which only three specimens exist on the market, was auctioned under lot No. 171 in our 28th auction with a starting bid of €50,000. One of the other two specimens was featured in our very first auction ten years ago. Back then, it was sold for €41,400. The second existing specimen is in a private collection and the third has now been sold in Prague for €204,000 – five times more than ten years ago.

Beauty hidden in a gold medal

This extremely rare (RRR) gold medal has a diameter of 50 millimetres and weighs 35 grams. It was struck in Kremnica in 1686 during the reign of Leopold I. On the obverse, you will find the triumphant monarch with Turkish prisoners in the background. There is also an Eye of Providence surrounded by rays of light on the top right and an ornate coat of arms on the bottom right. The reverse shows the siege and bombardment of the fortress in Buda with an eagle in flight carrying a sword above. When examining this medal under a microscope, you can spend hours gazing from the perspective of the heavens at the tiny world below you.