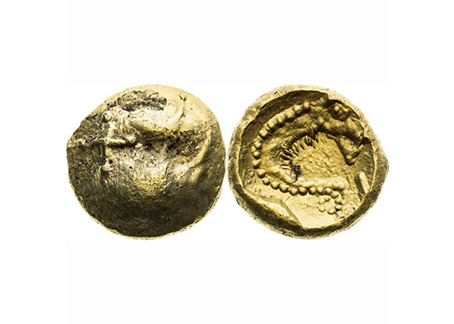 ‍There are times when we have to grit our teeth and admit our mistake. In our 28th auction, we included a very rare Rolltier type Celtic Stater. Unfortunately, it was only after printing the auction catalogue that we discovered it was a modern fake. We are therefore withdrawing the coin from the auction and apologise to all who believed the coin to be genuine.

This is a fake from a workshop that was active in the late 1990s. A number of other fantasy and semi- fantasy imitations of Celtic coins have come from the same workshop. The counterfeits produced in this workshop were widespread among collectors at the turn of the millennium. However, once their origin was discovered, they gradually ceased to be traded and fell into oblivion. In the meantime, the previously marginal field of collecting became a very prestigious discipline and the number of “Celtic” collectors has increased manifold. As a result, the forgotten fakes are beginning to reappear on the collectors’ market and find their buyers.

Once again, it is becoming apparent how important it is to follow best practices when building a collection. Even coins shelved for decades in “old” collections may not be genuine, and even the most seasoned experts can sometimes be wrong in their assessment. Public auctions bring added value when it comes to buying coins, medals and banknotes. Material placed in the public auctions of well-known auction houses is under the watchful eye of collectors and so is critically confronted by a large number of experts. Therefore, you don’t end up putting it away in your collection for 30 years without sufficient verification, which is a common risk in the case of hand-to-hand purchasing. It is advisable to buy rare and proportionately expensive coins only from reputable dealers who will honour a claim when in doubt about the authenticity of the material. In this context, we would like to point out that our auction house is the only one in the Czech Republic and Slovakia to be a member of the prestigious International Association of Professional Numismatists, the IAPN, which demands high standards of customer service from its members. We provide an unlimited and lifetime guarantee of authenticity for all coins sold.