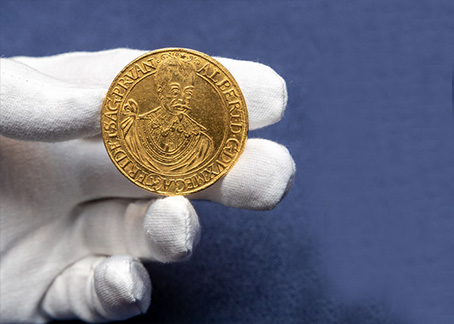 The highlight of our 28th auction, which took place on 22 April 2022 at the Mandarin Oriental Hotel in Prague, was a 10 Ducat of Albrecht von Wallenstein from 1631. The coin is interesting for the story of Albrecht von Wallenstein, who became the Prince of Friedland thanks to his war successes and land speculation. In 1631, the Ducal Mint in Jičín minted a large number of gold and silver coins. However, after Wallenstein’s murder in 1634, the emperor ordered all his coinage to be melted down and the metal processed for the minting of imperial coins under threat of property confiscation. One of the few remaining ten-ducat coins with Wallenstein’s portrait was offered to bidders with an opening bid of 200,000 euros. In the end, the new owner of this exceptional coin of Albrecht von Wallenstein from 1631 bought it for 432,000 euros.‍