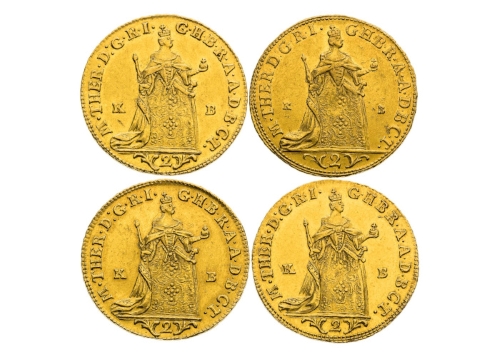 The 28th auction also offered collectors a set of gold and silver medals (8 pieces) depicting Alexander Dubček on the obverse and a map of Czechoslovakia and Hradčany – the Castle District of Prague – with the national flag on the reverse. The starting price for the set was 50 thousand euros and it was finally sold for 396 thousand. The sale price thus climbed to eight times the asking price.

This is a very rare set of ducat medals struck in 1968. A period which oscillated between the relaxed atmosphere of the Prague Spring and the invasion of Czechoslovakia by Warsaw Pact troops. At the time of issue, the complete set cost a staggering 2,830 German marks, which translated to over 55,000 Czechoslovak crowns plus value added tax. The delivery was at the end of September. The medals are housed in their original hard leatherette etui with the metal logo of Deutsche Numismatik. Included is a black-and-white certificate with the number of pieces struck and a photocopy of a page from the Numismatik List, which mentions the upcoming new mintage of these medals and the possibility of purchasing them for members of the Czech Numismatic Society.