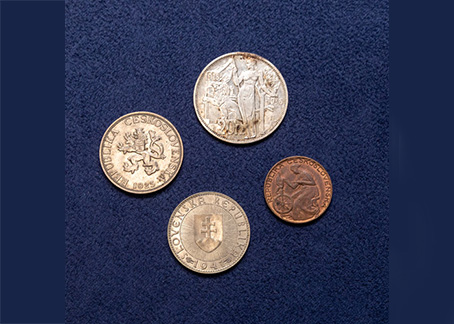 A prominent place in our 28th auction was taken by coins that had never been in circulation. That’s because pattern strikes are coins which were produced at the mint as a test during the creation of a new monetary system. They were made according to several artistic designs as a basis for selecting the most suitable model and alloy, and for assessing the technical parameters of the coin. Pattern strikes are extremely rare coins. They are mostly found in the public collections of national museums and national banks.

In our spring auction, not just one, but several rare Czechoslovak pattern strikes were auctioned. As we expected, the interest in these exceptional coins was really high. The hammer prices of some proof coins exceeded the starting prices by 4 to 5 times.

The pattern strike of a 20 Koruna 1938 (lot No. 355) went from its starting price of EUR 40,000 to a sale price of EUR 288,000. This is a piece from the zero series from the period of October 5 and 6, 1938 whose purpose was to test the final instruments. The test striking took place on 20 August 1938, but these strikes differ in the amount of linden leaves on the linden behind the female figure. This is a very rare specimen, which proves that in 1938, the state wanted to issue a 20-Koruna coin to commemorate the 20th anniversary of the founding of the Republic. Unfortunately, due to the consequences of the Munich Agreement, the coin was never issued.

Other pattern strikes sold in the auction

The pattern strike of a 1925 5 Koruna (lot No. 352) reached a sale price of 108,000 euros from its starting price of 20,000 euros. This is a very rare pattern strike, one of two known and probably the only two produced specimens from 18 February 1925. This pattern strike dates to the period when the ruling committee recommended that the author of the winning design, O. Gutfreund, make some modifications to his models so that they could be recommended for implementation. Even this coin design was not approved as final.